Camping? Why Yes I do That Once in a Blue Moon

August 3, 2015August 3, 2015 Kimberley LinkletterCamping? Why Yes I do That Once in a Blue Moon 0 Comment
Tags: Alberta, camping
Having a grandson after being a mom of three daughters has definitely changed the focus of family vacations. A visit to Disneyland for instance, features a lot more time looking for Captain Hook and Goofy than Cinderella and Snow White. Our most recent favorite thing is camping. Not that our girls didn’t like to camp but this was usually reserved to Girl Guide camps and our trailer site at the lake. The boy prefers tents, dirt and camp fires, preferably by a creek where he can skip rocks and go fishing. With a week off and a low Canadian dollar, we decided a camping staycation would be just the thing.
The choices for camping close to home in Southern Alberta are vast. A great place to start your vacation planning is the Travel Albertasite.  It has a ton of information on things to do for families, couples and friends. The quick trip planner helps you discover (or rediscover) the province with options that include romantic getaways and stuff kids like. We decided on the Crowsnest Pass after finding out their annual Open Doors & Heritage Festival lined up with our visit. The event spans Friday through Monday of the August long-weekend each year and is filled with low-cost activities.
The short three hour drive from Calgary to the Crowsnest took us through a variety of southern Alberta landscapes, from glowing wheat fields to small towns to evergreen topped mountains.
Road signs along the way gave us plenty of ideas for future road trips but our destination for the night was the Lost Lemon RV Park and Campground. This quiet park sits on the Crowsnest River and offers grassy tent sites right on the water’s edge. The sites are cozy but each has a fire pit and picnic table with room for a decent sized tent and one vehicle. 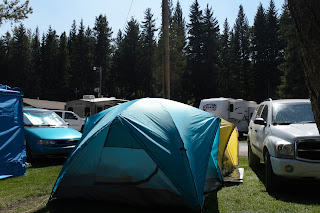 The grandson was kept amused by a trio of visiting deer who watched with curiosity as we unpacked the SUV. He was also pretty happy about the CPR tracks across the river and happily waved to the engineers as they rumbled past. The adults were less enthusiastic but as it turned out there were only two trains that night…one after the other. 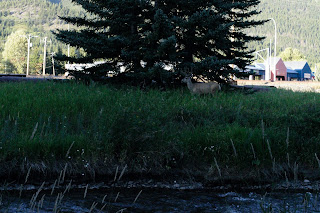 The promise of getting to stay up late to see the “blue moon” rise over the mountains was enough to get the young man into his pj’s and settled down by the campfire.

Day two we visited a country market, stopped in at the Crowsnest Museum and drove the 30-plus km to Sparwood, BC where we saw the World’s Largest Truck. This is not just a gimmick or a papier mâché rendering of a giant truck but the real prototype Terex Titan, built by GM in 1974. It served in a Kaiser Steel iron mine in California before being sent to Sparwood where it continued to be used by Kaiser, BC Resources and Westar mining. In late 1992, the Teck Corporation acquired the mine and donated the truck to the Sparwood Chamber of Commerce for preservation as a public monument. I know this because the eight-year-old told me to Google it. Ahhh the joys of a connected world.

After an afternoon swim in the pool at the campground, our intrepid young camper spent the afternoon alternately “birding”, taking pictures of passing trains and playing with his cars in the gravel (let’s remember, he is an eight-year-old boy after all). By 9:00 our neighbouring campers all seemed to be settling down for dinner as we were – although the adults next door seem to be whipping up something much more gourmet than our hot dog roasted over an open fire (are those steaks I see?) – but then again they didn’t have a bag of giant marshmallows to roast for dessert.
Some things are good to do even more often than once in a blue moon.

This site uses Akismet to reduce spam. Learn how your comment data is processed.

We are a homeschooling family who loves to travel. Follow along as we share stories of our adventures in both.

We are a homeschooling family who loves to travel. Follow along as we share stories of our adventures in both.

Save 15% on Melissa & Doug Pretend Play Toys. Use Code PRETEND15.